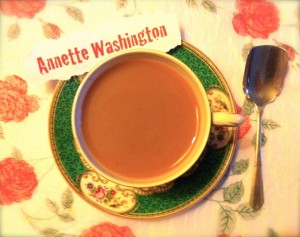 Sometimes there are days where you feel like nothing is going right. The roast gets burnt, a sudden downpour soaks the washing just as it was ready to be brought in off the line, it can be any little thing. And it can be that one little thing that makes a woman snap and throw the peg basket, just out of sheer frustration.

Take Annette Washington, for example. She was employed as a home health care worker, visiting the elderly at their homes to assist them with their medication, physical therapy, reaching the top shelf to retrieve the iced vo-vos. She was a good worker, and had every reason to assume she would stay in that job until she retired.

Annette had good reason to covet her job. She was a single mother with a 9-year-old son to feed, clothe and put through school. She also had a boyfriend, who needed his daily medicinal injections of heroin and snorts of cocaine. Annette’s weekly budget required her to continue working; these essentials didn’t pay for themselves.

As long nothing went wrong, Annette’s life would turn out just fine. Unfortunately, her employers had other ideas, and she was let go in July 1986. Now, losing a job is an unfortunate part of life, and it would be normal to feel angry about it. But she had really bonded with her elderly charges, had gotten to know their families. She’d even respected the fears her clients held about break-ins, by using a secret knock when she visited so they would know who they were opening the door to. All those little things, and she still hadn’t been able to keep her job.

July turned into August. The bills piled up, the fridge and pantry became devoid of food, and the heroin supplies dwindled. Annette became more and more desperate. She just had to do something. Then it occurred to her: she knew exactly where to find money, jewellery and other valuable things. She’d seen enough of it at the houses of her former clients. Being honest, they wouldn’t be living for too much longer anyway, so they had no real use for their valuables. And Annette really needed the cash.

Taking advantage of the knowledge she had of their movements, Annette chose Loretta O’Flaherty as her first cash point. Using two kitchen knives that Loretta had carelessly left lying around in the second drawer down in the kitchen, Annette sneaked up behind the 85-year-old woman as she sat crocheting doilies in the living room and cut her throat twice. Then she moved through the house, collecting money, rings and other items that she could sell.

After a successful afternoon of turning an elderly lady into an ATM, Annette was finally able to breathe a little. She paid a few bills, brought food for her boy and squared things up with the drug dealer who was holding her boyfriend up against the wall by his neck when she arrived home. Everyone was happy again.

For about two weeks. Then the money and shiny elderly lady jewellery ran out and she was left with the same problem. Annette once again looked at her list of former clients.

Edna Fumasoli was 68 years old, almost twenty years younger than Annette’s last victim, and (as Annette was to find out to her own detriment) quite a bit stronger than Annette expected. When Edna realised Annette’s intentions after letting her into her house, she fought hard. Royal Doulton crockery was broken, the flying ducks fell off the wall, it was a mess! However, 90 stab wounds later, Edna was laying on the floor and Annette was laying her hands on everything she could find.

With two similar murders occurring in such a short space of time, with the same motive and similar weapons and no signs of a break in, it was only natural for the police to begin thinking they might be linked. The families helpfully pointed out that there was a woman who used to work as a carer for both women. A really nice lady, that Annette, she was always so helpful. She even made sure she used the ‘knocking code’ so that Loretta and Edna would know it was her when she came to the door, because they were both so petrified of being robbed.

Annette was arrested the following month. She confessed to knowledge of the murders, but told her gaolers that it wasn’t her, it was an unnamed male accomplice. Her fingerprints were only on the knives because she had handed them to him. She’d apparently been under duress on both occasions. Oh, it was all a big mess, and could she please just go home now?

Unsurprisingly, the answer to that question was no. Since Unnamed Male Accomplice had not come forward, she would just have to stand trial in his place. She was handed a sentence of 50 years to life. If she was released after serving her fifty years, she will be almost as old as her eldest victim. In the interim, maybe she could learn how to crochet. Loretta never did finish that doily.